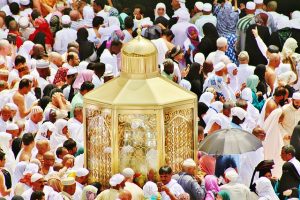 The clashes that occur between two Islam sects, the Shia and Sunni occur across the world of Muslim’s. In the area of the Middle East, a powerful mix of politics and religion have increased this divide between the Gulf States that have the Sunni governments and Shia government of Iran. The Pew Research Centre has published a report that has discovered that 40% of the Sunnis do not regard Shia to be real Muslims. Here is what divides the Shia and Sunni Islam and how deep this rift has gone.

These arguments date all the way back to 632 to the death of the Islam’s founder known as Prophet Muhammad. The tribal Arabs of this time that followed Prophet Muhammad disagreed on who would succeed him as well as inherit the religious and political office. The majority which then became known as Sunni’s that make up 80% of the Muslims of today are the ones that backed Abu Bakr who was one of the Prophets friends as well as the father to his wife.

The other side believed that Muhammad’s kin should have become the rightful successor. They went on to claim that Prophet Muhammad had anointed his cousin Ali and this group became the Shia which is a contraction from “shiaat Ali”, which were the partisans of Ali. The backers of Abu Bakr’s won, although Ali still briefly ruled in the role of the 4th caliph which was a title given to the successors of Muhammad.

The split in Islam became concrete when there was violence against Hussein son of Ali led to his death in the year 680 in the area of Karbala know today as Iraq by the caliph troops of the ruling Sunni. The Sunni rulers carried on by monopolizing political power and the Shia continued to live in the shadows of this state. As the years went by religious beliefs between these groups began to diverge.

Here’s a great video that explains the difference and how the segmentation isn’t an accurate representation of how to explain Muslims today: