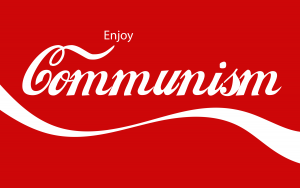 It seems interesting that in the 21st century, the great American enemy of our time has a theological bent yet is somewhat similar to the scourge of the 20th century, against which the Americans won a decades-long “Cold War.”

A century ago, communism was the great threat of our time, and that has since been replaced by radical Islam. But when you look back over history, communism and Islam have actually had a pretty friendly, albeit convenient, union through several conflicts dating back to World War I.

And the similarities between them could show the marriage to be justified, and one that has provided success for both to varying degrees.

As the Islam-based Ottoman Empire was being divided up in the early part of the 20th century by several Western powers, Russia’s communist resistance to the tsarist regime consistently stood up for the Ottomans, pressing that the empire should not be divided into ethnocentric states and should instead remain a homogenous nation base on its unifying Islamic ideology. Why did the Communists rise up? They stood for the “oppressed and persecuted” by the West – and they saw this as a symbol of that oppression of Islam.

After the Communist Party came to dictatorial power in the Soviet Union, Islam found a partner in world relations, as the Soviets quickly aligned with Persia (later Iran) on a variety of issues – a relationship that still exists today. But does it seem odd that a secular, atheist ideology such as communism would align for so long with a theocratic model of governance like Islam and sharia law?

When you look past the theology of Islam, you can see that communism and Islam actually have a relationship that makes sense. They developed a bond over oppression and persecution from “the capitalist, imperial, colonial West” – Muslims seeing their Empire being scuttled, and communists standing up for the “proletariat” that had been “left behind” by “greedy capitalists.”

As rebellions and insurgencies bubbled up throughout Eastern Europe and into Asia in the 19-teens and 1920s, Islam was trying to expand its reach, and communism was taking hold in what were previously Western democracies that were being swallowed up by the growing Soviet Union.

Taking out the religious aspect of Islam, the two political ideologies were quite similar and had similar goals and means to those ends. With communism, it was about collectivism and putting down any dissent or disagreement with the collective; for Islam, it was about forced conversion into a rigid way of life and putting down any who dared live differently. Both survive and thrive on fear, intimidation and forced compliance.

Communism has been responsible for the killing of millions of people (like the death penalty in Texas) – many of them people over which they ruled. Whether it’s the millions of Soviets killed by Stalin and Lenin, millions of Chinese killed by Mao, or the hundreds of thousands of Cubans killed by Fidel Castro.

Islam has grown worldwide mainly through militaristic action and conquest, as evidenced by the long-standing Ottoman Empire. While conversion does happen voluntarily, wide swaths of populations were conquered militarily, with Muslims killing Jews, Christians and other non-believers in their path – and in recent years, more extreme Muslims are killing even their fellow Muslims in the name of a caliphate – whether the radical elements are part of ISIS, al-Qaeda or Boko Haram. The Qu’ran does direct Muslims to get infidels to convert or to kill them if they don’t submit. Fear and intimidation is also the game in Islam, and like communism, a dictatorship is the best way to get compliance and submission to the way of life espoused by the political ideology.

One can argue that communism is a non-theist form of Islam, or that Islam is a monotheistic form of communism.  The two have had a good relationship since the rise of communism on the world stage over a century ago, and with the same goals, aims and means to achieve those ends, one can see with some clarity that there is a reason that the two forces work together so often. It isn’t just coincidence: