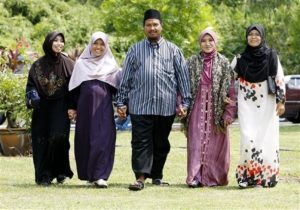 There is a lot of confusion surrounding polygyny and the role it plays in Muslim marriages. While some believe it’s just another way for the men to exercise their power, others believe polygyny was invented by Muslim cultures. These are clear misconceptions, and don’t really justify the uprising against it.

First of all, the laws and traditions surrounding polygyny in Muslim marriages are diverse throughout the culture. In certain Muslim countries it should be pretty common to see polygyny, while countries like Turkey and Tunisia don’t allow it at all.

Secondly, when Islam came into existence, polygamy was already part of several societies. Even the bible has instances of polygamy, indicating that the Islam religion simply adapted to general marriage guidelines at the time. In fact, polygyny was more focused towards taking care of the women while Muhammad was still alive.

Given that Islam is a very practical religion, it made sense at the time for one man to have multiple wives. This way orphan or fatherless children could have a father again, and women received security so-to-speak.

However, polygyny has never been an easy choice for a Muslim man, because he has to maintain justice and fairness between all his wives. The Qur’ãn states that if a man takes a second, third or fourth wife (four being the limit) it’s his duty to give each an equal amount of everything.

In modern times polygyny isn’t recommended, mainly because it requires a special type of man who can always be objective. This is also why it doesn’t happen very often. And although it’s not a tactic to discourage polygyny, Muslim men have to prove why they need a second wife to a family court, in addition to proving he can take care of her just as well as he’s taking care of his current wife.