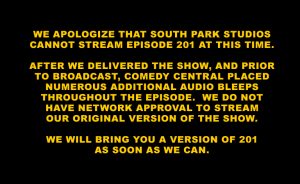 South Park creators, Matt Stone and Trey Parker made the mistake of depicting Mohammed in an episode. The backlash was unprecedented.

Believe it or not, this tradition of not depicting Mohammed stems back all the way to the beginning of Judaism. Most of us are familiar with The 10 Commandments. In this case, we are discussing the first commandment “I am the Lord your God, thou shall no other gods before me.” In the Basic English version of the Bible this phrase is expanded to also include the following:

You are not to make image or picture of anything in heaven or on the earth or in the water under the earth.

There are many interpretations of this passage in the scriptures. In ancient times, pagans worshiped idols or icons. This commandment is what made Judaism stand out from the other religions of the world at the time. That their God was “invisible.” Very religious Jews do not have photographs or portraits because humans are made in God’s image and that might be breaking this commandment.

Christians have a much looser interpretation of this scripture. As some of you may know, Catholics consider Jesus Christ to be devine which goes against the first commandment. Have you ever wondered why Jehovah’s Witnesses are all doomsday and fire and brimstone? Because they feel that modern CHristians are actively breaking this commandment.

Which brings us make to Islam. The Islamic tradition of not depicting Mohammed is almost sort of a combination of Judaism and Christianity. In response to Christians who have turned Jesus into a divine figure, Islamic Scholars did not want the same thing to happen to Mohammed. They believe that there is ONE God and he alone should be worshiped. They also believe in the Jewish sensibility that man is in the same likeliness of God and therefore should not be depicted.

For the record, the Quran never explicitly states that drawing or depicting Mohammed is forbidden, but through interpretations of the first commandment and in response to the growth of Christianity, this tradition has been continued.