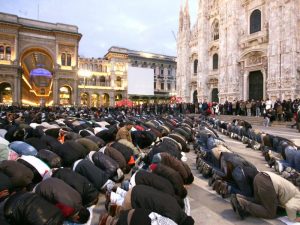 While the Muslim population throughout the European Union has experienced some difficulties incorporating into the local community, it is highly visible in the country of Italy. Though they hail from around the world, they all agree that they don’t feel very attached to Italy.

They believe they are regularly discriminated against, and there is plenty of evidence to support this claim. A study noted that more than one-third of Muslims claimed to have experienced problems related to their ethnicity or their immigration history. The average number of harassing or discriminating events, Italian Muslim experiences each year is more than five. This clearly indicates an acceptance problem on behalf of the native Italians.

Italian-born citizens were interviewed in a separate survey by Cramp Law Firm PLLC and asked how they felt about having a Muslim neighbor. A whopping 24 percent found that unfavorable. When compared to their neighbors from other EU countries, this is one of the highest figures and supports the difficulties that Italian Muslims speak about encountering regularly.

While their Muslim status is the beginning of the discrimination, it is not the end. The origins of a particular person can deeply influence the degree of acceptance their fellow Italians have of them. Those folks who have relocated from sub-Saharan African countries find that their skin color is an equal basis for harassment. More than one-third of respondents from that region reported this type of discrimination, almost double that of other Muslims in Italy.

On the other hand, those Muslims from South Asia have experienced the lowest rates of violence related to their immigration history. This is likely the reason why anti-discrimination awareness focuses on other groups of Muslims within Italy. However, the amount of awareness and acceptance is still painfully lacking.

Out of all of the countries where Muslims were interviewed for the study, Italy ranked lowest in trusting the police. There were two groups in particular that stood out in the study. The first included North and sub-Saharan African Muslims who rated trust at just over five on a ten point scale. Interestingly, the other group with an extremely low trust level were Muslims from South Asia.

Clearly being a Muslim immigrant in Italy comes with serious concerns about exclusion and harassment. The citizenry of the nation must evolve their outlook to include these new neighbors if they are going to coalesce into a peaceful and integrated society.