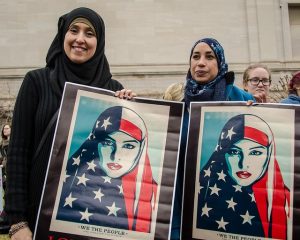 Most people who haven’t experienced bullying are confused by the debate that surrounds it. They define the word as similar to the constant teasing that envelops us as we grow up and go through the public school system, but that’s not what bullying is. Bullying is a constant everyday thing that comes at someone from all sides all the time, and to the victim, it feels universal and unending. Like it can’t stop, no matter how much you want it to. That’s why the environment that Muslim American children grow up in today is so terrifying. Imagine how you might feel if all you hear on the news is how evil a big part of your upbringing is. It’s not so easy to put ourselves in their shoes, and most of us seem not to care.

Not everyone had the same experience, as is expected.

Writer Haroon Moghul says that religion got in the way of his high school experience, and so he contemplated a turn to atheism as a means of combating the perplexed feelings exhibited by his peers. Oddly enough, he was drawn back into his faith because of his Roman Catholic peers. If they could believe openly, then why shouldn’t he? Even though these years were tumultuous, it wasn’t until college that 9/11 happened and his identity became shaped by the reality of what others had done. Although he doesn’t necessarily connect one element to the next, Moghul goes on to write about his battle with being bipolar and a divorce. How did his childhood affect these parts of his life?

Sara Barry is an Egyptian and Muslim who can speak Arabic, but she grew up far from home. As is true of anyone who other kids pick on, it can be a difficult struggle to feel different. It’s not easy to pass through that barrier, either. Barry was asked if she spoke Muslim, and when she admitted that her religion barred her from pork consumption, the confusion was obvious and the questions were endless. Therein lies another problem with being different: even when people aren’t openly abrasive or negative about who you are, they’re curious and want to know the details. It can become a headache having to explain and relive the same small moments each day of your life.

Although the hardships associated with growing up Muslim in America today can vary greatly from individual to individual and certainly from one region of the country to the next, it’s still important to empathize with those from other walks of life as often as possible, and to help one another make it through this journey whenever we can. The Muslim identity is just one of many, and it should be no easier nor more difficult than any other.