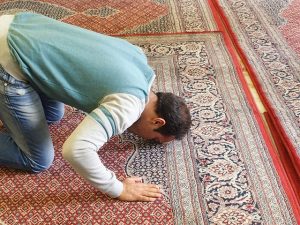 Tradition is one of the most important parts of Islamic religion, and Muslims derive a lot of fulfillment by enacting specific routines taught to them by the writings of the Qur’an or the words of the Prophet Muhammad, passed down over the centuries. One of those routines is the tradition of Salah, a reference to the five daily prayers at five specific times of the day.

The devout and faithful of Islam are disciplined. Take for instance the idea of requiring any of us to perform a routine action once a day based on any kind of obligation at all–most of us would find the task difficult. Many of us have significant trouble cooking once a day much less wording a prayer five times a day. But Muslims do just that, and each prayer may not be done before its Salah time. If that sounds hard, imagine having to set an alarm, not for work or school, but to perform Fajr, your opening Salah prayer that must be performed at first light and by sunrise.

There are four more prayers to come after Fajr, and each is determined by where the sun is at in the sky as the Prophet Muhammad was taught by God (Allah). Because the position of the sun in the sky is based on your own location, Salah times will change based on the region you inhabit. If you live in the U.S., then you’ll pray at completely different times than other members of the Islamic community who live in the Middle East or elsewhere abroad.

The second prayer is called Dhuhr, and begins in the middle of the day, lasting for only twenty minutes. The third is called Asr, and takes place in the afternoon, specifically when your shadow is the same length as you. The fourth prayer is known as Maghrib and occurs at sunset. The fifth and final prayer is called Isha’a and should be said before midnight has passed.

Those are the easy rules. Each prayer is done at very specific times though, and getting those times correct requires a lot more technical schooling in the ritual than you might imagine. If you don’t even know what the word “zenith” means, then you have a long way to go before you can perform Salah on your own. And you thought lawyers had it hard when they were going through law school.

Complicating matters even more, certain Islamic sects differ in their opinion as to exactly when some Salah times occur. Although these differences are usually mild, believers really do have to know their stuff.

In addition to the five daily Salah times, there is also a Friday prayer. This special prayer takes the place of Dhuhr, what is usually the second Salah time of the day.

The prayer itself requires participants and the location where the prayer is done to be clean. Women usually have their hair covered. Before beginning the prayer, you must face the direction of Mecca. Although there are many aspects to the prayer, one of the most interesting occurs at the very end. Participants will look over their right shoulder, hoping to acknowledge an angel who has recorded all their good deeds and then over their right shoulder, acknowledging the angel who has recorded all the wrongful deeds.

Learning the prayer itself takes time and practice, and a lot of memorization. Knowing when to stand, kneel and bow is just as important as the reciting of the prayer itself or getting Salah times correct. Even so, with determination, it can be done!