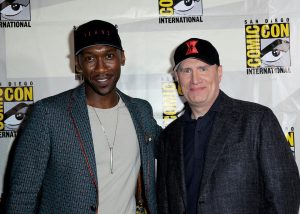 While this is a great headline – a huge movie studio casts a Muslim actor as the star of a film, the fact that the actor is Muslim has nothing to do with anything at all. Mahershala Ali, an academy award-winning actor for his role in Moonlight was cast as the character Blade in the reboot of the franchise.

The character of Blade is not Muslim, so casting a Muslim actor is on the same level as casting a Jewish or Christian actor. Mahershala Ali was not casted because he was Muslim and Marvel is trying to fill some hole in their diversity line-up. He was cast because he is PHENOMENAL ACTOR! The fact that he is Muslim has nothing to do with his Academy Award win or other breakout performances. It is simply because he is a great actor.

Ali is however very proud of his Muslim identity, and often shared his experience of converting and the struggles of living not only as an African American in The United States but also living as a Muslim African-American. He has gone on the record that since the characters that he is playing are not Muslim that this is a true representation for the Muslim community – that they are just normal ordinary people. In the past, the superhero genre usually reserves Muslims to be the villain i.e Faran Tahir’s role in Iron Man or Aasif Mandvi’s appearance in Spider-Man 2.

This is not the first time that Ali has been playing a role in a Marvel property. He was featured on the Marvel & Netflix show Luke Cage in Season One playing the gangster of Harlem Cottonmouth. The fact that he was a Muslim didn’t play into his villainous nature like the other who came before him.

Please note: While Blade is a Marvel property – Blade will not be part of the MCU.

Also, I don’t know why this is such a big deal considering the original Blade, Wesley Snipes, was also a Muslim.