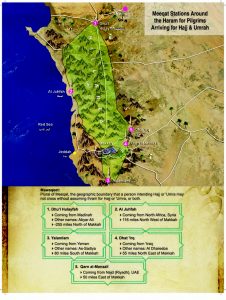 Members of the Islamic community must make a pilgrimage to the holy city of Mecca at least once during their lifetimes, as one of the Five Pillars of Islam. During this pilgrimage, members of the faith might visit a Miqat where they typically put on a garment called an ihram. The garment is white cloth, and wearing the ihram is mandatory. This is because Ihram is also a state of being in which the participant not only wears traditional clothing but also cleanses body and mind in preparation for what is to come.

Five Miqat stations were designated by the messenger of God, the Prophet Muhammad. A last was eventually installed for those traveling from eastern countries. The stations include Dhu’l-Hulayfah, Juhfah, Qarn ul-Manazil, Yalamlam, Thaneim, and Dhat-i ‘Irq.

The purpose of stopping at a Miqat station is specifically to enter the state of ihram. Although they may seem simple from the outside looking inward, rituals involved are strict. Most Muslims will be familiar with most of the routines from a young age. When entering ihram, it is forbidden that a man ties knots or wear stitched clothing–even footwear. The feet must not be entirely covered, but different Islamic sects have slightly different views on how much of the foot must be allowed to show while entering ihram.

While women might choose to wear a hijab or dupatta if they wish, their faces must remain exposed. This means they cannot wear a burqa or niqab. In another deviation from ritualistic prayer that occurs in the traditional mosque, men and women are allowed to pray in the same room together. The logic is that on the Day of Judgement, there will be no gender segregation.

Hygiene is incredibly important to maintaining a truly authentic state of ihram. If the Ihram is worn is somehow sullied, then the entire ritual is deemed invalid. Muslims must refrain from using scented products while wearing the ihram attire and entering the ihram state, or the ritual is again considered invalid. That means no deodorant until departure. The same goes for women: no cosmetics can be used during a visit to a Miqat station.

Muslims are accustomed to ritualized cleansing and cleaning before prayer. The same goes for prayer that occurs at a Miqat station. Muslim men must be “whole” during their visit. The state of ihram requires they leave hair and facial hair intact. Additionally, they do not trim their nails. Everything else is familiar with any member of the Islamic community. Members must not smoke or engage in sexual relations, they must not curse or kill animals, and they must not fight with one another. In essence, they must maintain their purity for the duration of the ritual.

Interestingly, it does not matter whether a Muslim is on air or land. When entering the strict zone of a Miqat, one must put on the ihram. If on a plane, it is perfectly acceptable to wear it while flying. Many choose to put it on from the airport. Pilots are aware of this ritual (of course) and usually make sure their passengers are aware whenever they fly into a Miqat zone so they can change if necessary.

More important than anything else is the participant’s relationship with God. Other daily affairs are of no importance despite this not seeming intellectual. If one has pressing concerns from home, then one must bury them until his or her return. The mind is important to a Muslim, and thoughts must not deviate from the goal: prayer.