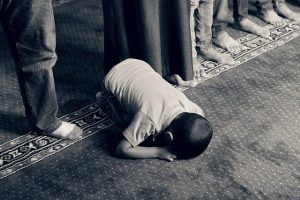 It is claimed that Abraham is the father of the three major religions – Judaism, Christianity and Islam – but in some ways, the three religions are barely related to each other in terms of their doctrines and teachings. About the only thing they have in common is that they are all monotheistic religions, meaning they teach that there is only one God.  That one God, however, is looked at from very different angles, enough that it may be hard to reconcile the teachings as all coming from the same Supreme Being.

Nonetheless, who is Mohammed anyway? Let’s take a quick look at where Islam’s prophet comes from in his human experience.

Mohammed was born in Mecca in 570, but was basically an orphan, as his father passed away before his birth and his mother died just after his birth. He grew up being raised by his uncle, who was a merchant in the bustling city in Arabia.

In the sixth and early seventh century, orphans were often ostracized from “normal” society, and that was similar to how Mohammed was treated. What complicated things for him were that he was a religious and spiritually-minded person growing up, while Mecca was very much given to pagan idols and a society that might be considered decadent. As a religious orphan, Mohammed was not treated well, as he was essentially bullied and disrespected despite his acting honestly and forthrightly with many with which he dealt.

Mohammed was reportedly honest and trustworthy as a merchant, but he did not always like the pagan society his fellow residents were living. He was a religious man and believed in God. As he got into his 20s and 30s, he would often escape to some caves above Mecca for long sessions of prayer and reflection.

Around age 40, while Mohammed was at one of his regular cave prayer retreats, he claimed that he was visited by the angel Gabriel. Mohammed said he kept getting visited by Gabriel with various revelations for more than 20 years, and would eventually have all his revelations – which he claimed came from God Himself – written in a book, called the Qu’ran, Islam’s holiest book.

During those early years, he started gathering a few followers who listened to his revelations. But he was not accepted by his fellow men in Mecca, and in fact, many of the tribes in the area despised him and were hostile to him as he tried to teach and spread his “word of God” to others. He left Mecca and took refuge in Medina – about 260 miles away. The start of this journey is signified by the start of the Islamic calendar.

It must be said, in fairness, that while he claimed to be very much against the decadence of the culture and society present during his lifetime – which included illicit sex between men and women, polygamy, and infidelity – he reportedly had as many as 12 wives at one time, and allegedly had sex and married girls as young as nine years old, even when he was in his 50s.

Mohammed the Father of Islam

After being rejected for several years and not getting very much traction with his new religion called Islam (which means “surrender” or “submission”), late in his life he gathered 10,000 followers and turned them into an army and launched an attack on his beloved city of Mecca, looking to finally uproot the pagan idolatry of the city.

This “army” of Muslims took over Mecca upon its invasion, and once conquered, it flipped from its pagan belief system to the monotheistic Islamic faith. In his last years, Mohammed was believed to have ordered more than two dozen militaristic conquest missions of his “army” of believers in order to spread his theology and to increase his estate planning.

Mohammed’s revelations, known as the “word of Allah (God)” are read in the Quran, while the Hadith contains Mohammed’s own sayings and teachings.  Today, about 1.5 billion people are believed to be followers of Islam.