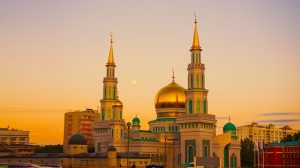 Islamic ritual is a strict affair, and Muslims must exhibit extreme discipline in order to stay true to their religion. Take Ramadan, for example–during this month, followers fast from sunrise to sunset. How many of the rest of us could do that? In 2017, the month of Ramadan started on Friday, May 24 and will end on Saturday, June 24. But what is Ramadan, and why is it so important to Islam?

Ramadan is set during the ninth month of the Islamic calendar, and is important as one of the Five Pillars of Islam, or the five mandatory acts required of believers. They include: faith, prayer, charity, fasting, and a pilgrimage to Mecca (a trip must be made at least once during the lifetime of a Muslim). Fasting during Ramadan is considered ritualistic, as opposed to repentant fasting or ascetic fasting.

Fasting is required during Ramadan once a boy reaches puberty, and can only be avoided if one has a medical condition that preempts religious obligations. Another noteworthy exception occurs when women are in the process of menstruating, but there are a few others.

A key purpose to Ramadan is ensuring one’s own awareness of his or her sins. During this time of prayer and looking in at oneself, believers must try to atone for past sins and ask God for forgiveness for any committed. In addition, other Pillars of Islam should be at the forefront of one’s mind. Muslims must reaffirm their core values and uphold their principled teachings by avoiding anger and aggression, dismissing greed and lust, and attempting to better communicate and fit in with other members of the Islamic community.

Not surprisingly, the root of the word Ramadan, ramida, is associated with heat and dryness. If avoiding food and drink wasn’t difficult enough, Muslims must be mindful to avoid any act that might hold negative connotation in some circumstances. Because of the nature of sexual activity and the lust generally associated with it, relations of that kind must be avoided from dawn to dusk during Ramadan. Even though fighting is forbidden, Muslims are still allowed to defend themselves when necessary–even during Ramadan.

While avoiding certain behaviors is a core tenant of Ramadan, it is also expected that certain pious and charitable acts will take place more often. The Qur’an is usually recited more often, and Muslims take the time to perform more good deeds for their fellow man. More than anything else, Ramadan is about devotion and an increased connectivity to God.

During the last ten days of Ramadan, probably on an odd-numbered night, it is thought that the Laylat al-Qadr or “night of power” occurred. The night is especially meaningful because the Prophet Muhammad told his followers that they could worship for a thousand months and not come close to the power of worship on that night. The Islamic community believes that the night of power is the night when Muhammad was first granted revelation of the Qur’an by God.

Coincidentally, the Islamic faith might be onto something that goes well beyond religion. While fasting is traditionally considered a terrible idea because it slows metabolic processes and forces your body to start consuming itself, research published in a 2014 issue of Cell Stem Cell indicates it can revitalize your immune system. Perhaps Ramadan fasting is a lot more than a simple renewal of spirit and faith! Although primarily spiritual, it may heal the body as well.