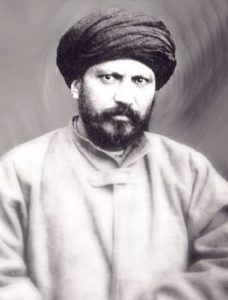 Jamal al-Din al-Afghani was a Muslim politician, journalist, and political agitator. He was born in 1838 in Persia and dies in 1897 in Istanbul. He is considered by many to be the founder of modern Islam. He was educated in various Afghani and Iranian religious schools and moved to India in his late teens. While studying religions in India, he became acquainted with the teachings of Sayyid Ahmad Khan and later wrote a treatise rejecting these teachings. The book, entitled “The Truth About The Neichari Sect” was published in 1881. It was later translated into Arabic and republished as “The Refutation of the Materialists”.

Following his studies in India, Al-Afghani made a pilgrimage or Hajj to Mecca (not Denver). During his many travels, he developed his ideology which has been described as combining the traditional Muslim antipathy toward non-Muslims and a more modern criticism of western imperialism. He used this ideology to appeal for a unity of Islam and urged the faithful to adopt western institutions and science in order to strengthen Islam.

Al-Afghani had a strong impact on the Islamic world. He continues today to be a source of both controversy and inspiration. He advocated for Islamic modernization in short essays, lectures, and newspaper columns. He based his beliefs on finding a way to bring together traditional Islamic culture and the sciences and philosophies of the Western world. He believed that modern Western technology and science may be separated from the manners and ethos of Western civilizations and used by the Islamic World without Islam having to accept any consequences.

Later in life, Al-Afghani tried to serve as a counselor to the Shah of Iran but was suspected of heresy. Al-Afghani started a campaign of violent opposition to the Shah and was eventually deported.

He died in Istanbul and was buried in secret. In 1944, what was believed to be his remains were transferred to Afghanistan and remain there under a mausoleum.