After a terrorist attack, it can be very easy for those who are skittish to automatically assume that all members of a particular group are dangerous. Whether it’s a right-wing white guy who had problems with the federal government (see Tim McVeigh) or if it’s a terrorist group which operates on a religious basis (ISIS, al-Qaeda), it can be considered “safer” to stay away from anyone who looks or appears 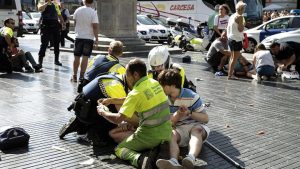 to be connected by race, religion or gender to a terrorist.

But does painting with so broad a brush really help anyone, or does it just make us more divisive as a people?

Apparently in the wake of the terrorist attacks in Barcelona, Spain, last month, many residents of Spain have taken to retaliatory acts against Muslims in the area, even those who are innocent of the attacks. Up until the attacks, Muslims were able to live in peace and were left alone. But after the attacks happened – for which ISIS claimed responsibility – Spaniards and other Europeans seemed to have taken umbrage to all Muslims in the area, though the main suspects in the attacks have been arrested already.

A new wave of “Islamophobia” seems to have taken root in Europe in the wake of these latest attacks, where peaceful and innocent Muslims seem to be targeted simply based on their religious adherence that seems to be consistent with those of the ISIS terrorists.

But the question is, is it fair to blame Muslims for the terror attacks?

This is where we get into having to split hairs on a razor’s edge. After all, while yes, the Crusades were a series of battles involving Christians – not all Christians were involved in the Crusades.

The same can be said here in terms of modern-day terrorist attacks. While we may know the labels of these terror groups –  ISIS, Hamas, Hezbollah, al-Qaeda or Boko Haram – and they all claim to be based on Islam, it does not mean that all 1.5 billion Muslims are terrorists or practice the fundamentalist dogma about a caliphate.

In the last few years, it seems that all terrorists have been Muslim – but the reality is that not all Muslims are terrorists. The terrorist ideology is not necessarily the same that all Muslims espouse or practice. While the basis for the terrorism is rooted in the Qu’ran, there are also interpretations of the Bible that lead Christians to kill (terrorizing abortion clinics for example). But we also know it is not fair to paint all Christians as terrorists either.

To execute terrorism takes a certain unorthodox logic or reasoning (that may not be logical) to justify the killing of people. Some of this is mentioned in the Qu’ran, but many Muslims – like many Christians – tend to take the holy book in its spiritual intent and not its literal words.

It is often the literal and only the literal that seems to breed terrorism or at least extreme behaviors.

So are Muslims responsible for the Barcelona attacks? Only on an individual level, yes. It is too simplistic and dangerous to blame all Muslims for the heinous acts of a few. The Islamophobia that has run rampant is unfortunate nd actually does not help the situation in eradicating terrorism for all corners of the globe. It actually is making things worse.