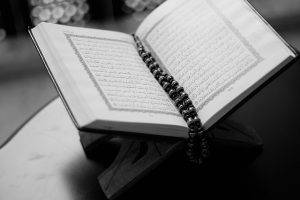 While the three major worldwide religions are monotheistic and promote one God, they also have one singular book that dominates all their teachings and is the foundation of each doctrine.

Judaism revolves around the Torah, Christianity the Holy Bible, and Islam has the Quran. All three books are based on teachings from God, or Jehovah or Allah. All three are called Abrahamic religions, in that they are all believed to be descended from Abraham, one of the great religious prophets.

Let’s take a look a little deeper into the Quran, considered one of the holiest books in the world.

The most holy book of the Islamic faith is called the Quran, which is translated into “recitation,” which is what the book is claimed to be – a transcript of all the revelations that the prophet Mohammed received from a series of visits from the angel Gabriel.

Mohammed claimed to be first visited by Gabriel around 610 A.D., when he was 40 years old. He supposedly had some servants or followers who were directed to remember and recite Mohammed’s revelations as he relayed them, and after Mohammed’s death in 632, the revelations were compiled and organized into the holy book.

It is considered Islam’s “word of Allah (God),” and it actually does refer to several stories, parables and allegories in the Bible. These revelations reportedly elucidate some of the moral and spiritual insights from these stories, touching on some just a little bit and having a full expounding of others based on the moral and spiritual message that may be considered “erroneous” from other interpretations out of the Bible or the Torah.

Muslims claim that, while other holy books can be read and understood in various languages, the Qu’ran can be only truly understood when read in the original Arabic.

All three books are deemed to be the “word of God,” and are compiled by a series of scribes and the prophets have little direct work on each of the books. With the Bible and the Torah, though, there are some references to history as well as theology to lend some context to the teachings and doctrine that were espoused in those books.

With the Quran, though, there is no reference to historical events to provide context in some of its teachings. It is virtually a theological book throughout. Without historical context, Muslims will often consider all of its teachings as timeless and can be applied in any society and culture over the last 14 centuries.

Finally, though, a caliph (Islamic leader) settled much of the disagreements about what Mohammed said or meant, created a single Quran and declared it the “authoritative” word, and ordered all previous manuscripts and copies to be destroyed. So there is no known record of the process in compiling the book and no record of what the original texts said, or if there were any texts that were left out or included at the last minute.