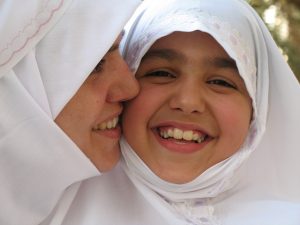 A lot of people believe that the Islamic Community and its strict religious beliefs and tendency to uphold its most valued traditions means that feminism cannot possibly exist within its metaphorical borders–but that just is not the case. Not only is feminism alive and well within the Islamic community, but it could also be argued that the fight there is far more important than anyplace else. Even so, it’s important to realize that feminism for a Muslim means something far different than it does to the average western feminist. And that’s okay.

So what is feminism to the Islamic community, and what form does it take? The answer is far from simple, but let’s try to break it down anyway.

Islamic feminism is predicated on the belief that women are not, in fact, meant to submit to the will of man–a common religious belief not only in the Islamic tradition but also in other major religions as well. This is obvious enough in modern history, as women have held higher offices such as prime ministers and heads of state in predominantly Muslim countries.

Like other feminists around the globe, they primarily seek equality in both public and private settings, but they also focus on equality within a mosque setting–where it perhaps matters most. One of the biggest voices in modern Islamic feminism since 2002 is Margot Badran, who fights to obtain a modern dialogue for feminist voices within the Islamic community (currently an impressive eighty years old!). Islamic scholars have labeled the fight of Islamic feminists as radical rather than practical, but contemporary circumstances worldwide have led to an increased need for discourse from all sides because a great part of Islam seeks to gather greater support inside and outside of the Islamic community.

Even as early as the seventh century, the fundamental rights of Muslim women have been fiercely debated. Understandably, the topics under consideration than were far removed from the topics we discuss today. One extreme example is that of female infanticide, a practice in which female offspring were murdered to make way for the more desirable male heirs and inheritors. The practice was eventually banned, paving the wave for a very real, but very gradual improvement in the way women have been viewed and treated over the centuries since then.

Today, things are different–and so is the fight. While western feminists fight only for equality, those in countries dominated by Muslim communities tie the fight for equality into the need for secular democracy. The Revolutionary Association of the Women of Afghanistan (RAWA) is based out of Pakistan, and its primary function is to increase both the involvement and relevance of women up to full participation in all political and social aspects of their culture. This same organization is also tied into the fight against radical Muslim terrorists and their beliefs.

There are a number of other groups at home and abroad who work with similar intentions. They include “sisterhood,” a platform for Muslim women to have their experiences and stories shared. Another is Sisters in Islam (SIS) of Malay. There is also a global movement called Musawah (the Arabic word for equality). Many of these organizations meet fierce resistance from both men and women who disagree or believe the time is not right for the debate, and so the fight is slow and ongoing. Still, it needs to be fought for things to change for the better.