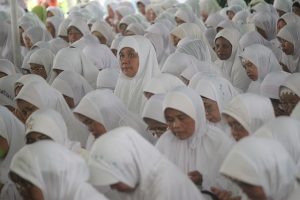 Sunni Muslims belong to the largest Islam denomination, Sunni Islam. The name is derived from the word Sunnah, a reference to the good example of Muslim behavior set forth by Muhammad, the prophet.

Disagreements arose between the Shia and Sunni Muslims in 632 A.D., regarding who should be Muhammad’s successor. These arguments created a larger divide over time, becoming broader and more political, in addition to the dissenting juridical and theological opinions.

One group, which eventually became the Sunnis, believe that Muhammad never specifically designated any particular successor, and that by electing his father-in-law Abu Bakr to become the first caliph, they were acting according to Muhammad’s sunnah. They believed that it was only important that the successor be someone who was pious and would follow Muhammad’s religious example.

Another group of Muslims, who would eventually become known as Shia Muslims, disagreed, and believed that the successor should be a blood relative of Muhammad. They believed that Muhammad had intended Ali ibn Abi Talib, his cousin and son-in-law, to be his successor.

The tension between the two Islamic groups have continued throughout the generations, to varying degrees. Current ethnic conflicts, in addition to the recent rise of Wahhabism, have fanned the flames of discord between them. Many of them seek out immigration lawyers to move to different countries.

Sunni Muslims make up 87 to 90 percent of the global Muslim population, which makes them the largest religious denomination in the world, with Catholics being the second-largest. In English, Sunni followers are known as Sunnis, Sunnites, Sunni Muslims, and Ahlus Sunnah. Some refer to the denomination as “orthodox Islam.”

The Sunnis read the Quran, the book containing the sayings of the prophet. They believe in the six pillars of iman (faith), the Maturidi and Ash’ari schools of theology, as well as traditionalist theology. They fast during Ramadan, follow the required ritual prayer (including 5 prayers per day), make a promise to travel in pilgrimage to Mecca, give to the poor, and pledge themselves to their Muslim faith.