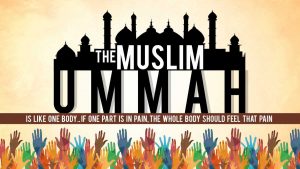 Part of what is so special about living life as part of the Islamic faith is knowing you’re a part of a much greater community, and the faith as a whole derives strength from the sum of its individual parts. Ummah is exactly that. Ummah is the whole of Islam, each member bound to all the others by the special religious ties from which they find meaning. The word itself means simply “community” or “nation,” sometimes confused with the word for ancestral ties, “Sha’b.”

It’s important to distinguish the past and present Ummah. Early in the Qur’an, Ummah was originally indicative of a single group of people with shared spiritual and religious beliefs. Now, Ummah more refers to all of Islam. Sha’b, then, is used to distinguish different groups of people based usually on regional differences.

Curiously, the Constitution of Medina–inspired in part by Muhammad’s actions and insights for the document in CE 622–refers not only to Muslim citizens of Medina as part of the Ummah, but also Jewish, Christian, and Pagan citizens. This isn’t entirely surprising, as Jewish and Christian religions share the same god with Muslims, although their beliefs and customs and traditions vary widely. The various religions, Christianity in particular, assimilated a number of Pagan rituals over the centuries before they became popular.

The Ummah of invitation includes all these other communities that don’t directly fall under the flag of Islam, while the Ummah of response includes only Muslim followers of the faith. According to Islam, the Prophet Muhammad was sent to invite all people to embrace the enlightenment that the guidance of the Muslim faith offers, but only those who accept the invitation will be rewarded with eternal paradise when life in this world has ended.

Ummah has more important implications for the development of the Islamic faith. In the past, Arabic communities rule themselves based mostly on tribe and blood relation. When the Prophet Muhammad helped spread the concept of Ummah throughout these various communities, it had a uniting effect. No longer was blood or a single community’s history of tradition most important, but the whole of Islamic culture–the Ummah itself connected them all together and gave the entirety of Islam a renewed sense of purpose that has perhaps fragmented in the many centuries since Muhammad’s death.

Part of the success of Ummah was based on the idea of spiritual salvation and the importance of the messages from God that Muhammad helped show the faithful. It gave them a much different way of thinking about their place in the world. God’s will was most important, and everything else was secondary.

Ummah is mentioned sixty-two times in the Qur’an, and most references are about the various peoples that are subject to eternal salvation rather than the whole of Islam. Most historians acknowledge that the word’s meaning changes over time, at first roughly translating to “people” before eventually evolving to mean the Islamic community as a whole–an obvious parallel to real-life history.

Even though the Ummah isn’t technically a guiding principle of the Islamic faith, it certainly does help the community as a whole find equilibrium while its members find their way through life. It is that peaceful reservation that makes Islam so special to its devoted members.