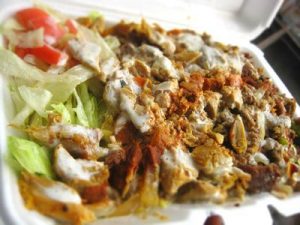 Many people have heard of the term “kosher,” though fewer technically understand what it means outside of being a Jewish term toward certain foods. In terms of food, the word refers to anything that is “proper” to eat according to Jewish law. In order to be considered kosher, various conditions must be fulfilled.  For example, in order for meat to be kosher, an animal must possess cloven hooves and be known to “chew its cud” – “cud” referring to already-partially digested food. Beyond this, though, other conditions regarding preparation need to be met in order for food to be considered kosher. And while it is may be less commonly known in parts of the Western world, Islam has similar processes by which they grade their food as well.

Similar to “kosher” meaning “right” or “proper,” the term “halal” that is applied to Islamic foods also tends to mean “permissible” and is even used more in context to “lawful” according to the Qur’an (as opposed to “haram,” meaning “forbidden”). Also similar to be foods being kosher by Jewish standards, many conditions must be met in order for food (and meat particularly) to be considered halal, according to law firm practice management software. Many of these conditions take heavy consideration toward the treatment and well-being of the animal as well as the most humane way of slaughtering it for the sake of food. The entire process of making food halal by way of slaughter requires several steps or conditions to be fulfilled:

This entire process of slaughtering is known either as Zibah or Zabihah, and it is considered by Muslims to be the most humane method of killing animals for the sake of halal food and food in general, criticizing the use of captive bolt stunning. While there is argument made toward this that the bloodletting of an animal after the cut could be considered inhumane due to pain potentially registered to the animal, Muslims argue that – in a proper Zabihah – the animal loses consciousness within seconds before the brain can register pain, and the animal eventually dies due to cerebral hypoxia (deprivation of oxygen to the brain) rather than actual blood loss.

Other conditions for halal food exist beyond the slaughtering of animals. For example, halal food prohibits the consumption of alcohol or any other intoxicant, swine-based products such as pork or bacon, animals of a carnivorous persuasion, and lard among many other products.